This is yet another iteration of the Petit Wine Specialty series that Aldi carries. So far to date, I think the original Petit Wine Specialty ‘Chocolat’ version is the best by far but I’m definitely liking the variety that has come out since then. I think I’ve counted four varieties in total. The last two, admittedly, I’ve never formally written a formal product review about. There was a caramel & toffee flavor and a mint and dark chocolate flavor that I had already tried prior to getting to this newest iteration, the vanilla bean. 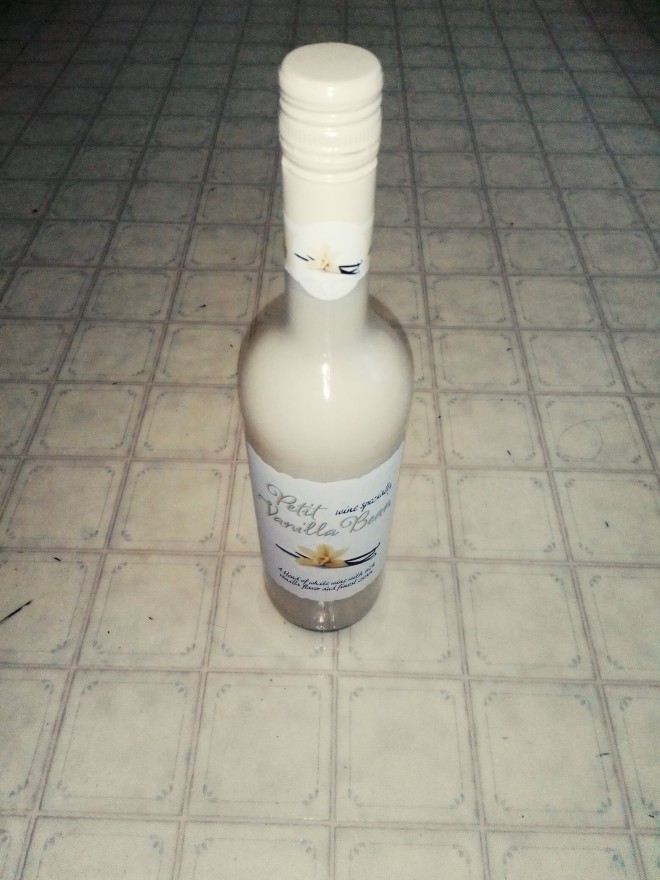 The caramel and toffee one was pretty alright but the mint and dark chocolate was definitely the better of the two. This newest iteration is alright. It’s more cream than vanilla bean, if anything, which isn’t a bad thing in and of itself. The cream flavor for all of these versions will eventually get to you, if you don’t have a sweet tooth like me. It’s a heavy cream taste and unless you like it mixed with vanilla and wine, it can get overwhelming. For me, it’s tolerable and can certainly keep drinking but for the average drinker, I think you should probably just stick to one cup–maybe two cups maximum.

Otherwise, between the four, this one has, by far, the lightest cream flavor than the other three flavors. I think it might just be the fact that it is made with white wine and cream as opposed to red wine and cream. The first few sips go down pretty smooth and the flavor profile is quite pronounced, at least on the first few sips. Afterward, once your palate has gotten used to the flavor, every subsequent sip becomes a little less pronounced. The alcohol will slowly get to you, which may or may not be a good thing.

The alcohol by volume (ABV) is at a respectable 13.9% for a 750 ml bottle of wine. Then again, the average wine that isn’t flavored with anything else does tend to hover between 13-16% so I guess I shouldn’t be all that surprised that it falls within the average range. In any case, for wine that has the ‘finest cream’ and vanilla bean added, it’s hard to complain. I mean, it’s definitely more easily drinkable than say the average bottle of chardonnay or pinot grigio, which, at least for me, are two of the types of white wine that I don’t care much for but would prefer it over any red wine with the rare exception of sangria.

All in all, I think I still like the original ‘chocolat’ version as well as the mint and dark chocolate flavor more than I like this one. But I’d still buy it, if the original wasn’t available. I would still just prefer the chocolate version just because I like chocolate more.

Leave Me Your Ramblings Cancel reply